Given the previous post, if you’re delving into this one too, you’re either thinking ‘hrm I wonder if my wife will let be buy one’ and/or ‘hrm I reckon I could build one’

Read this next bit – then we’ll revisit the options…

I set about converting my 2006 Trek 1000 road bike into an ebike in order to reduce the severity of some steep hills on my commute. And to overtake cyclists who are fitter than me.

I researched the options and ultimately settled on an ebay rear-wheel hub motor kit (with cassette style freehub) branded as ‘Yose Power’. I then had to buy the battery separately – you have to study the specs quite closely to make sure you get the right voltage and amp-hours for your motor, and make sure that the power adapter cable will fit etc.

The kit and battery were both shipped from a warehouse distributor in Germany, but had obviously come from much further afield judging by the Chinese characters on the box.

I was presented with; 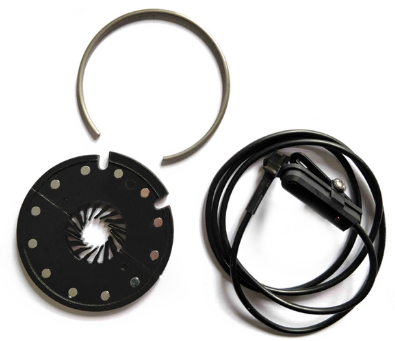 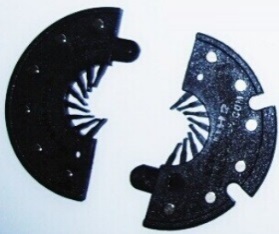 I then discovered that the switches are of the ‘dead mans trigger’ type, i.e. normally on, braking switches them off. For the controller to work they needed to be permanently depressed… I tried to do this with duct tape, and then attempted to solder the switch permanently, which also didn’t work. I gave up and began searching for an alternative brake switch. 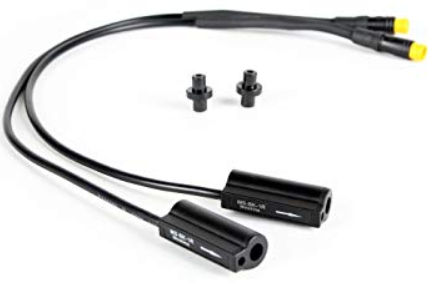 With the final installation of the ‘cockpit’ up front, the bike was complete and ready to ride. I had chosen a modest 250 watt motor so I wasn’t expecting blistering speed, but on my first ride I was impressed to say the least. (250 watts is also the legal limit for ebike on-road use…)

Suddenly steep hills and inclines that I struggled up previously became gentle inclines, and having experimentally set the ‘governor’ on the controller to its maximum, my new top-speed on the flat was now an enjoyable 15.5mph! Before I would have struggled to maintain 10mph continuously, now it was almost effortless!

I discovered that the controller uses the built-in speedometer inside the hub, together with your pedalling RPM and thumb throttle position to deliver just the right amount of power, as displayed in watts on the LCD screen. It revolutionised my commute, and at time of writing I’ve completed almost 1700 electrically-assisted miles!

[Thank you Pete for a both entertaining and informative couple of posts! I particularly like the Spokey Dokey Bikes plug – thanks for that! So there we go folks – if an aircraft hydraulics specialist can manage it, how hard can it be?!? I have not had the pleasure of working on a “Yokes Power” unit, but I have worked on both Bosch and Shimano STEPS systems, so you’re in safe hands (plus there’s always Pete to consult! Thanks again Pete, great posts]

Also, we have added Pete as a permanent guest to post as he wishes – so you’re no doubt in for some real treats!

Chris (and Pete) out.